My name is Roberto. I was born in 1963, in San Martín, Buenos Aires province.

My father was part of a blended family. He had many siblings on both parents’ side. My paternal grandparents lived in Córdoba and when they died, my father and uncles went to live to Buenos Aires.

My mother’s name was Yolanda del Carmen. She was a very pretty, elegant and tall woman. On the other hand, my father was short, had curls and a round face.

My father was very violent with my mother.

My memories of Buenos Aires are vague, but I do have some memories. I remember that we lived in a “conventillo” in Tropezón. Our house was one single room in which we all slept and in which there was also a dark wooden table on which we ate.

I’m the eldest of three siblings from the same mother and father. When I was 4 years old, my middle brother 2 years old, and my younger brother 21 days old, our lives changed forever. 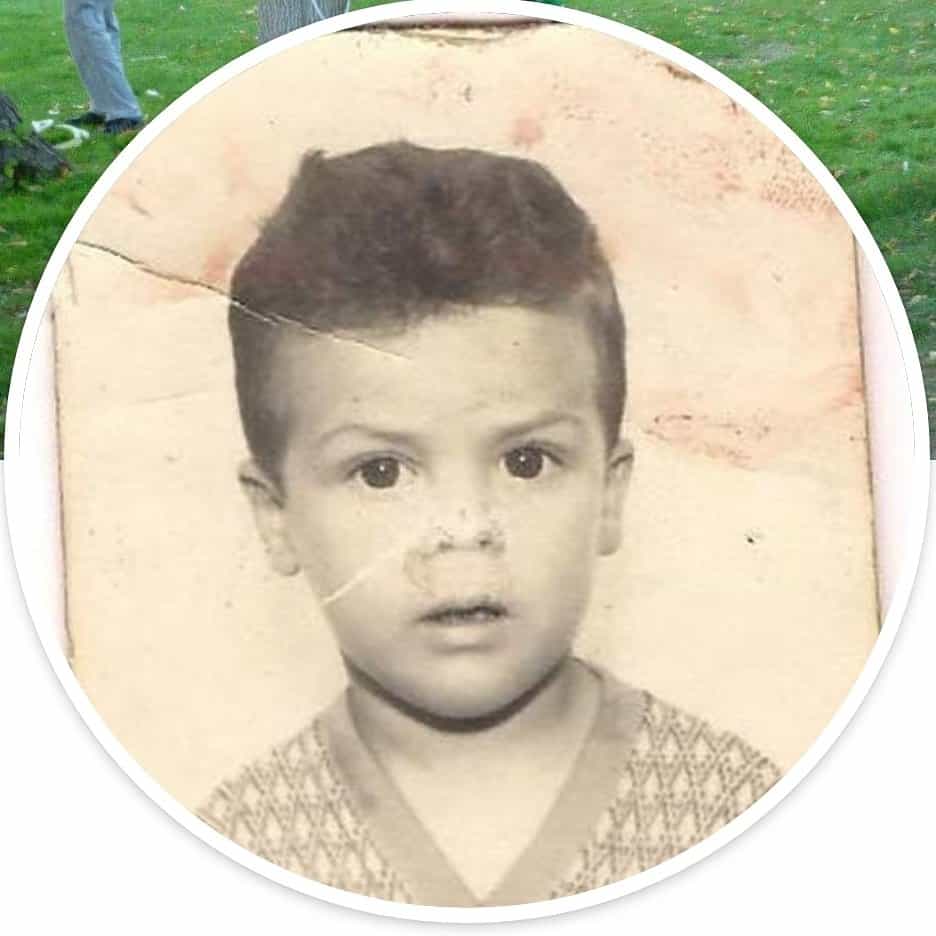 It was September 21st., seven o’clock in the afternoon (I remember there was a sunset), my Mom was outside the house. Suddenly she looked inside the house, through the window and pointed a gun into the room and fired three shots at my dad.

I remember that he had come home from work and was wearing a white sleeveless shirt. My mom got the three shots right, and my dad immediately managed to throw me under the bed. Today I think my dad probably saved my life because my mom just pulled the trigger and fired.

My dad fell on his knees at the end of the bed. My brother and I were crying. We didn’t understand anything. My mom looked inside through the window and told me to go with her. I climbed up the table and jumped out the window to go with her.

The neighbors began to approach the house to see what had happened.

My mother grabbed me and my brothers, and we went by bus to the police station. When we arrived, she turned herself in.

After my mom turned herself in to the police, my brothers and I went to live with our uncles. As my two brothers stayed in Buenos Aires, I went to live to Neuquén province with an uncle.

At that time, society treated orphaned children like ‘bastards’. They differentiated us and made us feel unprotected. I felt very discriminated.

But, after some time living in Neuquén, my Mom Lula adopted me.

Lula hadn’t been able to have children. When she found out that I had come from Buenos Aires and that my father had died and my mother couldn’t take care of me because she was in jail, she decided to meet me.

She went to visit me and with time, her visits became a habit. She treated me very well.

After sometime, she invited me to her house and one day she asked me if I wanted to sleep there. There was a bedroom only for myself, with a wooden bed and a ‘bambi’ picture on the wall.

Lula was married. Her husband was a butcher.

Sometime later, they both asked me if I wanted to stay and live with them. Of course, I said yes, and I stayed. I remember the day I approached Lula, whom I called ‘Auntie Lula’, and asked her if I could call her ‘Mom’. She lost her balance and said, “If you want to…, yes”.

Lula and her husband were very strict people. Besides, they didn’t get along well with each other. They fought a lot and after two years of living with them, they ended up splitting up. He left and I never saw him again. I stayed with my mother, who started working in tailoring and fortunately she did well and I never lacked anything.

After some time of living with my mom, my adoption was finally formalized in court. My uncle, the one who had taken me from Buenos Aires to Neuquén, met with my mother and told her: “He is not going to be in better hands than yours”. He said goodbye and returned to Buenos Aires. The truth is, that this uncle of mine took care of us, as best as he could.

My mother, Lula, raised me in a very rigorous way, very strictly. If I was eating my dinner or lunch, I couldn’t get up from the table for any reason. If I wanted to go to the bathroom when I was eating, I could not. All my life, my upbringing was very strict. In fact, I never spoke to my mom on first-name basis. I always spoke to her on a formal way.

The most important thing my mother did was to send me to the school she sent me to. It was a priest’s Catholic school.

I’m not a believer. I don’t believe in God, but I do believe in community. I believe a lot in the priests who educated me, who were fabulous people and always treated me as an equal, and gave me lots of opportunities.

At my school, no one knew that I was adopted. So, the people around me didn’t make me feel different, but I felt different.

I was ‘adopted’, and I felt it all the time.

Maybe it had something to do with the fact that my mom’s family did make me feel like I was ‘adopted’. I was never treated as part of the family. I was always left for the latter. I always felt like I had to earn the right to belong because I wasn’t part of the family in a biological way. All my cousins went on vacation and I wasn’t invited. They all got together for dinner and didn’t invite me. They only invited me when they invited my mom.

In high school, I met Father Sabino. One day the Father Sabino wanted to come to my house to meet my mother. I took him, and when he saw her, he told her: “Miss, I’m taking him this weekend. He’s going camping with me. And from that weekend until I finished high school, I never slept a Saturday or Sunday night at my house again. I was always helping the underprivileged with the priest. We spread “the word”. Father Sabino was a very important reference in my life. I learned a lot from him. In addition, the school, that educational institution, had a very good influence on me. They accepted me and taught me values that always helped me move forward.

In my last year of high school, I also became very close to the Governor of Neuquén’s son. We became close friends. I was adopted and poor, and he ‘opened the door of his house for me and I opened their refrigerator’. His family also taught me another way of living, another way of thinking. They were very open to me and offered me a lot. They gave me confidence. They accepted me as an equal. I really liked listening to my friend’s father speak. It was a spectacular time.

My group of high school friends found out that I was adopted when we were on our senior year. And no one ever made any difference. But I did feel different about being adopted.

Over the years, I learned that adoption is not a state, it’s just a way of being family. ‘Being adopted’ creates a stigma. Today I prefer to say ‘I was adopted’. There are no mothers of the heart or children of the heart. We are all children, like everyone else, with full rights. And adoptive parents are parents with full rights and responsibilities, just like any other parent.

Today I can say that I am a happy man. I am a lucky man. I have three children whom I love and enjoy every day. And I found ‘the mountain’ as a way of life. I am a mountaineer, and an instructor. I like to go to the mountain, with people and also alone. At the top, I like to meet other people and also myself, in the solitude of the abyss. Reaching the top of a mountain generates the desire to ‘meet’. The personal achievement of climbing a mountain and reaching the top, gives me a lot of happiness, yes. But this is only a part. The true summit is the desire that it generates, going down again and meeting my people. My children, my neighbors, my students, my classmates.

Since my first day in this world, I’ve ‘climbed a lot of mountains’ and I still do. But I have also reached the top, yes.

Today I feel complete, I am happy.

– Roberto lives in Neuquén. He is a political marketing analyst but he works as a mountaineer.

He has a Facebook page called: Yo FUI Adoptado (I WAS adopted)